Is Menopause Affecting Your Work Life? 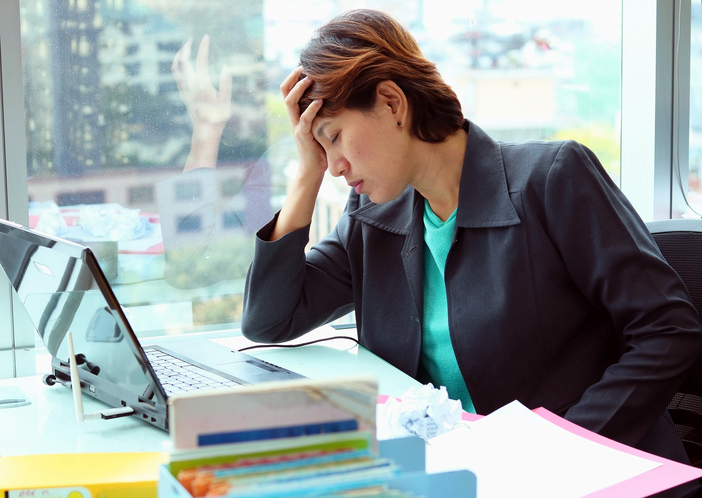 Myra Hunter,  emeritus professor of clinical health psychology at King’s College London and colleagues published results of the first ever  study examining menopausal symptoms and the effects on women at work. Funded by the charity, Wellbeing of Women, the results showed symptoms of menopause could greatly influence work but with cognitive behavioral therapy interventions via a self help book, women felt symptoms had less of a negative impact.

One hundred and twenty- four women between the ages of 45 and 60 years of age participated in the trial. Participants expressed experiencing on average 56 hot flashes per week. Half of the study participants recieved a self-help book explaining how to discuss menopause at work, and coping mechanisms for work stress. They were also asked to journal their thoughts during hot flashes as apart of cognitive behavioral therapy exercises.

Five months later, the participants who had received the self- help booklet reported a 30% reduction in hot flashes, and better sleeping patterns. Follow-up interviews with the participants showed that 82% noticed the trial lessened the effects of their symptoms and 37% of the participants had engaged in discussions about menopause with their manager.

Angela Bonnett, 57 knows all too well the challenges that can come with menopause and literally trying to keep her cool. Bonnett is a senior project manager at a well-known financial institution with over 30 years of experience. Five years ago, she entered menopause and began experiencing; hot flashes in meetings, night sweats in her sleep, mood swings, difficulty concentrating and irritatbility. Bonnett worked harder to maintain high performance. She tried to alleviate her symptoms by layering clothes so so she could quickly change if necessary and by taking extra notes in meetings to help jog her memory.

Bonnett agreed with the philosophy of not mixing work and her personal life, to her, "menopause felt like a particularly personal experience.” But when she unexpectedly became angry at a colleague, she realized it was time to have a talk with her manager.

She emailed her manager, a man in his 30’s, an article about a high power attorney who detailed her own difficulties at work due to menopause. Bonnett thought it would be a good method to start the conversation regarding her own symptoms. Her boss was unaware of how menopause was affecting her, but when she explained he was willing to help. He let her know that she could come in late or leave earlier whenever necessary. His message was clear, whatever she needs to cope, it's okay.

“Just having that reassurance made it a lot easier. I didn’t need to do any of those things, but knowing he knew was sufficient and removed a lot of the anxiety.”- Bonnett said.

Hunter feels menopause is still seen as "taboo" in some work establishments. However. she feels there are managers that want to help but are not sure how to provide assistance. The article raises the question, policies for pregnancy are standard, should there also be workplace policies for women experiencing menopause?

What do you think, should there be workplace policies on menopause? Read more about the study and Angela's story.